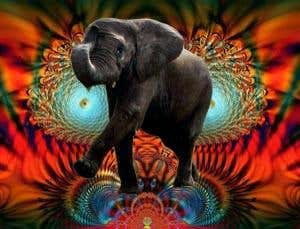 Above:  Don’t give an Elephant LSD!

Quietly, seemingly overnight, a long time friend of the Plant prohibitionists has sprung into existence in the U.S.  The Opium Poppy plant has been grown in North Carolina, in someone’s backyard, just as the Cannabis Plant, in it’s Black Market, commercial beginning had done some 50+ years ago.

It is not at all surprising that this should happen.  After all, there are no more available places to obtain a “legal” narcotic prescription for pain – except in the most dire situations, and even then it is questionable.  What else are people supposed to do?  Kill themselves with meth and poorly concocted Heroin?  People will always have a need for pain and anxiety relief.  I believe that God knew this when He planned for this Planet and the people on it.  That is why the      Bible states:

Then God said, “Behold, I have given you every seed-bearing plant on the face of all the earth, and everytree whose fruit contains seed. They will be yoursfor food. 30And to every beast of the earth and every bird of the air and every creature that crawls upon the earth—everything that has the breath of life in it—I have given every green plant for food.” And it was so.…

Even Elephants seek out relief.  All Animals do and we are Mammals.

As I’ve stated in previous articles, the Government knew exactly what they were doing and what would happen when they set up for the “Opioid Crisis”.  It was a horrible way to begin a Culling, and many people have died because of it and many more will continue to die.  Meth has taken over the market for the less fortunate peoples in the Country.  The ones who have a better income, can survive a little better with “street drugs”, but in the end Heroin usually wins out.

We, as a People have to become smarter about how we use the God-given Plants which afford us some much needed relief.  Cannabis  is the go to plant for most common and some not so common ailments.  However, there are times when stronger medicine is required and unfortunately these stronger remedies afford addiction as well.  Although it can be argued that addiction doesn’t become as big of a problem if the substance the person is addicted to is readily available.  That being said, I certainly would not advocate for addiction! Not only is it essentially illegal, it is the worse possible condition a person can find themselves in and if you survive and come out of it you are a very strong person.  A lot of people don’t survive it.

IF you must have a narcotic for pain or anxiety, use it wisely, and never let yourself get too attached to it.

Now, how to obtain that much needed “medicine”?  Everyone must learn to provide for themselves, not the Black Market, and be responsible for themselves.  That is why the Prohibition of Plants is so reprehensible.  We must be allowed to use the plants God put here for us to use!  No plant of any kind should ever be made illegal to grow!  Not even Opium!

There are many Plants that are naturally grown that can be used for Our own health and well-being.  One of them is Sassafras, which was removed from Root Beer some years ago in the commercial market.

One of the intended consequences of Roundup was the elimination of Dandelions!  Why wouldn’t the NWO want to eliminate such a useful plant from our grasp?

If you haven’t yet seen “Ozark” on Netflix, it is a very good show, depicting money laundering and drug trafficking in the Ozarks and elsewhere.  It was my first  experience with the thought of Opium being grown in the U.S.

Isn’t it odd that now, after the Cannabis legalization initiatives are growing Nationwide, that another “plant” that can be and IS prohibited by LAW, is starting to pick up pace…

In comes the continuation of Prohibition 2.0, Jail for Plants, to continuously fill the “much needed” Prisons around the Country whether they be “Corporate Prisons” for profit, or “County Jails”, for profit as well, because….well, they are ALL for profit!

What better way to control Mankind than to control ALL of the “Food”, which in fact IS Our medicine as well.

“First Do No Harm” must be made to apply to the Government!

Basil may be a common element of Italian food, but it also has great medicinal properties. This fantastic herb can help transform both you and your garden. It is very rich in beta-carotene, a precursor to Vitamin A. Vitamin A is essential for good vision, cell development, and immune health. Basil oil is rich in a compound named eugenol, which has anti-inflammatory properties and can comfort painful bones and joints just like over-the-counter ibuprofen. What’s more, it exhibits potent antibacterial properties and is effective even against antibiotic-resistant microorganisms.

Our Ancestors already knew what we now have to re-learn, how to use plants, all kinds of plants for our health.  Most people had Herb gardens that they used for medicinal purposes.  We have been essentially robbed of all of this information by having pharmaceuticals thrown at us from every direction since birth.

I am NOT saying that all pharmaceuticals are useless.  Quite the contrary.  Just that the People must be allowed to have sovereign control of what they will use for medication and how they will use it.  Plants must not be allowed to be controlled by Government entities solely for the purpose of eradicating  them from Our own personal use!

So let the Cannabis grow freely!  Let the Poppy’s grow freely!  What we choose to do with them will be good and bad, but never could it be as bad as what the Government has done with the control of ALL of Our Plants!

This issue gains even more momentum when you understand that it is not just about cannabis/hemp/marijuana. It also involves all food and plants which are coming under their jurisdiction. 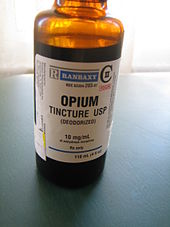 By the 19th century, laudanum was used in many patent medicines to “relieve pain … to produce sleep … to allay irritation … to check excessive secretions … to support the system … [and] as a soporific“.[7][8] The limited pharmacopoeia of the day meant that opium derivatives were among the most effective of available treatments, so laudanum was widely prescribed for ailments from colds to meningitisto cardiac diseases, in both adults and children. Laudanum was used during the yellow fever epidemic.

Laudanum, originally, the name given by Paracelsus to a famous medical preparation of his own, composed of gold, pearls, and other items but containing opium as its chief ingredient. The name either was invented by Paracelsus from the Latin laudare (“to praise”) or was a corrupted form of ladanum (from the Persian ladan), a resinous juice or gum obtained from various kinds of the Cistus shrub. The term is now used only to describe the alcoholic tincture of opium, a 10 percent solution of opium powder dissolved in high-proof distilled spirits.

Some things will forever hold true – History repeats itself and Mother Nature will always win out!

A Study on Laudanum

“One of our narcotics investigators came to the house looking for something else,” Catawba County Sheriff Coy Reid told the Hickory Daily Record. “When he knocked on the door, the guys said, ‘I guess you’re here about the opium.'”

And there behind the house, was row after row of poppy plants.