When Lisa Mastramico needed relief for her ailing tabby, Little Kitty, she turned to an unlikely source: marijuana. 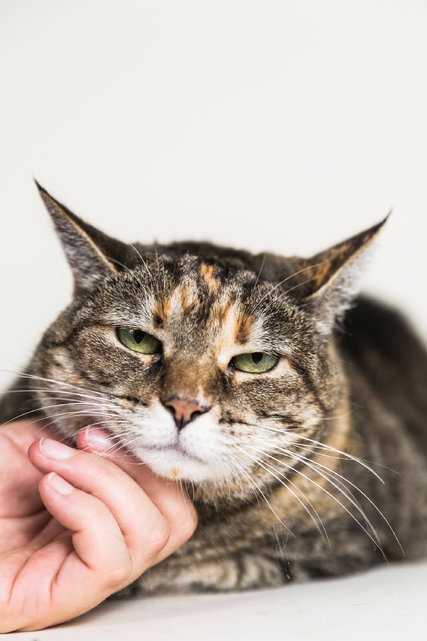 At 12 years old, the cat had arthritis. For a long while she spent her days hiding in a closet, where Ms. Mastramico had built her a bed of plush blankets. After trying various supplements that proved ineffectual, she went to a meeting for Women Grow, an industry group for cannabis entrepreneurs.

She was not sold on the idea right away. “My concern was that it’s not my place to get my cat high,” said Ms. Mastramico, the director of a public access television network in Long Beach, Calif.

But with Little Kitty becoming increasingly isolated, it was time to give it a try. She got a medical marijuana card and purchased two edible oils made for pets and derived from cannabis that she squirts into her pet’s mouth.

Little Kitty doesn’t hide anymore. In fact, she’s more like her old self: sunbathing on the living room carpet, playing with Ms. Mastramico’s other cat, Valentina. “When I’ve given it to her, she’s never acted high: falling face-first into her food bowl, chowing down,” Ms. Mastramico said. “She comes out and socializes, wants to be in your lap, wants to be petted. It’s a very noticeable difference.”

Other animal lovers who have turned to cannabis-based products to alleviate a host of pet maladies, including seizures, inflammation, anxiety and pain, are reporting similar results. Although they have not been approved by regulators, marijuana-based treatments are being used not only for cats and dogs, but for pigs, horses and domesticated wild animals.

Maria Ellis Perez, 55, a mold inspector from Pompano Beach, Fla., gives Treatibles chews made from hemp to one of her pets, a domesticated female skunk named Ricochet. At age 12, Ricochet limps and has cataracts. At one point, she had grown so withdrawn that she refused to eat. “We thought it was her time,” Ms. Ellis Perez said.

But after a few days of nibbling hemp, Ricochet seemed more content. “She was turning her head and looking up with the good eye,” Ms. Ellis Perez said. “She showed up for breakfast.”

The Food and Drug Administration has not approved cannabis for pets, in part because there is little research showing its effectiveness. Veterinarians are not allowed to write prescriptions for the products and, in states where marijuana is illegal, are wary of discussing the idea. Last year, a proposed state law was defeated in Nevada that would have made it possible for veterinarians to prescribe cannabis to pets with chronic illnesses. Still, users swear by the products.

Cate Norton, 36, who lives in Springfield, Vt., and works at an animal rescue center, said she drives her two Rottweilers, Ruby and Leia, to a veterinarian in Hanover, N.H., where medical marijuana is permitted. “My vet would like to do it but can’t legally touch it,” she said.

Ms. Norton gives 3-year-old Leia a hemp-based product called Canna-Pet for seizures and anxiety. In the eight months of treatment, she said, “there has been a great reduction in the severity of her seizures.”

To understand the effect of cannabis on animals, it helps to know a little of the science. The cannabis plant contains dozens of cannabinoids, among them THC (tetrahydrocannabinol) and CBD (cannabidiol). THC has the psychoactive properties that make people feel high but are toxic to animals.

CBD, on the other hand, offers the benefits without the buzz. Industrial hemp, used to make textiles and paper, is used in pet products, too, because its THC levels are negligible.

“Dogs are very sensitive to the effects of THC,” said Steve Blauvelt, a veterinarian in Bend, Ore. With the recent legalization of marijuana in some states, more pets have ended up in veterinary hospitals panting and in distress after digging into their owners’ stashes or pilfering a pot-laced cookie from the counter.

“Most pet owners who end up bringing their animal in are in denial,” Dr. Blauvelt said. But eventually, he said, “they come clean and say their dog ate one of their brownies.”

Pallas Weber, 53, a video editor in Los Angeles, was skeptical about giving cannabis to Emmett, a 12-year-old chow-shepherd mix who got a diagnosis of bone cancer in 2012, resulting in an amputated front left leg. But the painkiller her veterinarian prescribed left him too woozy to support his 75-pound frame on his other legs.

So last June, Ms. Weber bought Emmett a cannabis-based tincture called VETCBD, which is sold at California dispensaries. Four months later, she has reduced the painkillers, and Emmett moves with some of his old swagger. She uses it for Emmett’s anxiety, too, giving him an extra dose on the Fourth of July to keep him from diving headfirst into the closet. “Fireworks really freak him out,” she said.

Stephen Katz, the New York State assemblyman who is also a veterinarian, has teamed up with the University of Pennsylvania’s school of veterinary medicine to conduct clinical trials of Therabis, a trio of hemp-based powders he created for anxiety, mobility and itching.

“I had a lot of clients who did a lot of flying,” he said. “They wanted tranquilizers so they could carry their dogs in their lap.” He worried, though, about the harsh effect of sedatives on the dogs’ cardiovascular and respiratory systems and thought his clients’ animals would benefit from hemp.

At his practice in the Bronx, he said, he treats a number of pit bulls suffering from allergies and separation anxiety. “Those dogs scratch an itch down to the bone,” he said. The products’ cost is on par with prescription drugs, he said: about $20 to $40 a month.

Pet owners in California, where medical marijuana has been legal for two decades, are at the forefront of the trend. Rachel Martin, 32, a dog trainer, uses VETCBD for a variety of her dogs’ ailments. “All of them have very complex and detailed medical issues,” she said. A Jack Russell terrier named Shadow has had multiple surgeries; Sophie, a rat terrier, had a diagnosis of cancer; and Petri, a Chihuahua-mix, suffers from fear-based anxiety.

“I went to the weed doctor and said, ‘I need a card so I can get it for my dog who had cancer,’” said Ms. Weber, who said she doesn’t smoke pot or drink. “He said, ‘I don’t have a solution for that.’ So I told him I had insomnia.”

Maureen McCormick, 54, lives in Newport Beach, Calif., and was persuaded of marijuana’s benefits after relatives used cannabis products for their own aches and pains. She thought they would benefit her 14-year-old cat, Bart, who has arthritis in his front legs. “I told the doctor I had a knee that aches, and my shoulder, too,” she said. “I also said I want to use it for my cat.” She got the card in July.

Ms. McCormick is using a tincture by Treatwell, a California company that also makes edibles for humans. So far, though, she said she has not seen much progress in Bart. “It’s frustrating, because cats are more challenging than dogs,” Ms. McCormick said. She has adjusted the dose three times, working with Melinda Hayes, 39, the founder of Sweet Leaf Shoppe, a medical cannabis delivery service based in Los Angeles.

Ms. Hayes, who opened her dispensary in 2014, started working with pet owners and their animals last year after consulting with cannabis product makers. “It’s a lot of going back and forth,” she said.

She said she now aids 40 animals, and about half of her calls these days are about pet care. “I go as often as I can to meet the pet,” Ms, Hayes said. “Owners look at their loved ones through rose-colored glasses. People can verbalize their reactions. Animals cannot.”

She also gives cannabis products to her own pets: her boxer-terrier mix, Diva, who tore a ligament in her right knee; Snoop, her pitbull-Shih Tzu mix, who has allergies and anxiety; and Tug, a box turtle who suffers from disorders of the shell and the bones. Ultimately, Ms. Hayes wants to have a full-service storefront where people can take their pets for consultations and care.

“This way,” she said, “I can combine my two favorite things: dogs and pot.”